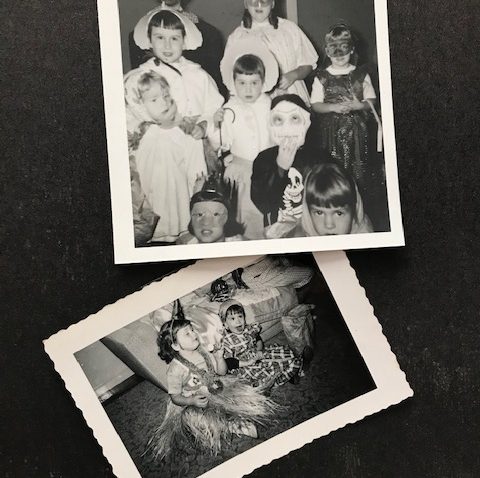 Contrary to today’s penchant for overdoing all things, Halloween was pretty much a one day dress-up event years ago.  Beyond the costumes, trick or treating and the two-dimensional pumpkins and black cats hanging in the windows, the holiday itself was no big deal.

We didn’t jump in vans, didn’t hop from one area of the city to another, didn’t Trick or Treat until we were high school age; nope, Halloween Trick or Treating was for kids only.  We loved running from porch to porch, up the stairs where the lights were on to welcome us, quickly spitting out an audible thank you before running back down to the next walkway.  Our Trick or Treat bags were small, often plastic pumpkins or small paper bags we’d decorated, but they were adequate size for the amount of candy collected.

People knew people and neighbors didn’t move very often; generations watched second generations often grow up on the same block.  Cookies wrapped in wax paper or foil, home-made candies…one didn’t need to go through the bag to sort “safe” from “unsafe” treats.  Kids normally didn’t roam very far beyond the initial home front (about a three block area); if we even thought about going up another street or extending our route, believe me it had to be done with more than one parent’s blessings.  Neighborhood parents were just as watchful as your own.  It was a good time to be a kid as someone was always looking after your safety and holiday fun.

On occasion, Mom would let us help pick out the candy to give away.  Some years we’d have to remind Mom that raisins, no matter how cute they were in the small little boxes, were not really what we kids wanted in our bags.  She tended to go after the familiar:  Tootsie Pops, hard candies, peppermint sticks, bubble gum, things that were familiar to her when she was a kid.  We had a shallow wooden bowl that Mom used for the candy every Halloween.  She’d place it on the desk with a small notebook and pen; she liked to keep count of how many kids came to the door each year.  So did our next door neighbor.

It didn’t help that Daddy had already checked out the next door’s bowl of goodies; he’d return home, reporting how great the candy assortment was next door; none of his remarks improved either our home atmosphere or our bowl assortment.  Mom could be oblivious when she chose to be; just what was wrong with our candy selection?

At the end of the evening, when the porch lights had been turned off, Mom and the neighbor conversed via their respective kitchen windows (across the driveway) and compared their totals.  The variance was the same most of the time: for some peculiar reason, our neighbor always logged a higher number of Trick or Treaters.

These census counts became somewhat of a contest for the women, though none of us understood what the big deal was.  Certainly, the men were not interested in any of this nor were we kids.

Mom, always the one with the investigator mind, couldn’t figure out how any kids would have stopped next door to ring the bell without then following up our porch steps; both houses were in the middle of the block.  Likely, their methods differed; one ticked off numbers, the other counted the small number of candy bars left in her bowl.

Also very likely, Daddy had eaten more than one candy bar on his earlier visit…