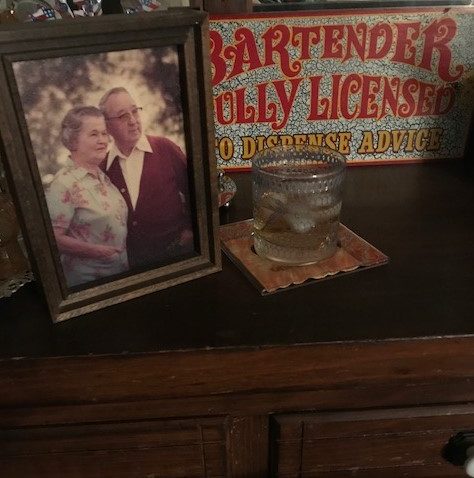 Like every child in junior high, all my mother had to do was walk in a room and I experienced “embarrassment”; it didn’t matter…whatever came out of her mouth, no matter how entertaining or engaging for the other adults, would easily direct me under the nearest available  table.

My mother was a genial sort who never failed to entertain my mentors with her laughing, smiling, and congenial personality.  Truth is she never stopped talking, especially when she was nervous.  Hence, her stories and jokes were nothing short of revealing to this twelve year old, especially when she shared a chuckle with my eighth grade art teacher.  Like the day she shared her favorite joke:

Eat every carrot and pea in your dish.

Giggle, giggle, smile, and the eyes twinkled.  My teacher thought it was cute; but then, her parents were of the same generation, so I am sure she had learned to cope much better after she’d passed thirty years of age.  I would not recover from this happenstance for another twenty years…

While Mom thought peas and carrots were funny subjects to joke about, she found little other vegetation amusing, especially that from my father’s backyard garden.  She couldn’t believe the amount of water that Daddy used each month to water and care for the plants; the water bill was easily the sorest subject for her every year.  There were other sore subjects as well; like the mud he always tracked in.

Daddy would come home after working all day, pour himself a glass of red wine, slice a piece of bread, grab a couple of slices of salami or cheese, then stroll down the hallway to the backdoor exit; he was on a mission: time to check his garden.

One could follow my father’s steps by the wine drops and French bread crumbs.  The kitchen door was a more convenient exit, but for some reason, he preferred to walk down the sixteen foot long hall, leaving his markings (I never had any problem believing Hansel and Gretel had marked their way back home; I’d witnessed this a hundred times as a child; bread crumbs are easily seen under any lighting, even on shag carpeting!)

Once he’d completely planted the backyard bed and lined up all the paste buckets for that growing season, Daddy moved forward, focusing on the planting space that remained along the sunnier side of our home.  Tomatoes and pepper plants lined the western side of our house, adjacent to our narrow cemented driveway.  Because of the hours of good hot exposure, some of the best fruits of his labor were produced along this narrow planting strip.

Mom maintained that it would have been cheaper to just run to the Japanese produce stand down on the boulevard.  But Daddy had decided that he would always have his garden.  Sometimes, the tension was very strained during those retirement years.  Each time Mom tried to explain that the cost of growing his own garden was not worth all the trouble, my father was more determined than ever to grow his own vegetables.

This particular day, Mom had had it.  The mud that Daddy tracked in with his prize crop (some of the tomatoes were no bigger than marbles) finally was too much for her to take.  She was tired of all the extra dirt and loudly said so. When she flatly refused to wash any of his garden harvest and told him to take it back outside and wash all the dirt off FIRST, Daddy said “to hell with it” and announced he would cook it himself.

I stopped by after work that afternoon, as sometimes I had a few minutes and, having returned to the area, I could enjoy a short visit a couple times a week before heading on home.  I walked in and Mom informed me that Daddy was outside with “his” vegetables.

I stepped out in back and discovered that Daddy had fired up the charcoal grill.  He was cutting up his prize vegetables and throwing them in a pot of water sitting over the coals; he was making soup.

Obviously, this was a very serious stance in my father’s eyes. I walked back in the house and noticed Mom was peeking out the back window, watching his every move.  She’d giggle a bit, and then return to her kitchen. Soon after, our neighbor arrived home, closed his garage, and saw Daddy over the wall, standing by the grill.  He walked over and heard the entire story while Daddy proudly showed him his “soup” and reiterated,

Our neighbor just chuckled and shook his head, finally taking leave and going home for dinner.

Don’t ask me what Daddy’s soup tasted like.  By this time in my life, I was old enough to understand this particular standoff was far from over; good time for me to split…